This is an Open Access article distributed under the terms of the Creative Commons Attribution Non-Commercial License (http://creativecommons.org/licenses/by-nc/3.0) which permits unrestricted non-commercial use, distribution, and reproduction in any medium, provided the original work is properly cited.

Background: Sputum Gram stains and cultures are standard tests for the diagnosis of lower respiratory tract infections. Analysis reports of the sputum quality are scarce in relation to cultures as well as clinical diagnosis.
Methods: A total of 1,523 sputum specimens, requested for culture, were evaluated for their quality using the modified Murray–Washington (MW) grouping system in association with the culture results. The clinical diagnosis was investigated for the culture positive cases.
Results: There was a significant difference in bacterial growth (odds ratio, 2.01; P=0.0164) and diagnosis of pneumonia (odds ratio, 4.18; P=0.002) between the acceptable groups (groups 4–5) and the unacceptable groups (groups 1–3). However, one-quarter did not belong to the current MW group. More than half of the sputum cultures were in group 6, with the lowest positive rate (18.0%). Overall, 10% of the sputum cultures were related to a clinical diagnosis of pneumonia.
Conclusions: The MW grouping system should be revised, because one-quarter did not belong to the current group. Further evaluation of group 6 will be needed. Improvement of sputum cultures is required to enhance the diagnosis of pneumonia.

Lower respiratory tract infections including community-acquired pneumonia (CAP) or hospital-acquired pneumonia (HAP) are major public health concerns, causing a variety of complications and high mortality [1-3]. More than 1.5 million adults are estimated to be hospitalized due to CAP, with an estimated 100,000 deaths annually in the United States [4]. Chest X-ray is the primary test for the diagnosis of lower respiratory tract infections [5,6]. Sputum culture is also a confirmative test to isolate the causative organisms of lower respiratory tract infections, such as CAP, bronchiolitis, and bronchitis, and therefore, is routinely performed in clinical microbiological laboratories [5,7]. Sputum Gram staining is associated with sputum culture results [7-10], and high-quality sputum provides useful information or guides the monotherapy [1,5,11,12]. However, the clinical usefulness of sputum cultures and Gram stains is questioned due to possible contamination of oropharyngeal normal flora and the complexity of etiological pathogens [6,10]. Adequate collection of sputum must be accomplished to obtain proper test results. Deeply expectorated sputum could serve as a high-quality specimen. Rinsing the mouth with water and coughing deeply early in the morning is recommended [8]. However, it is not easy to obtain a high-quality specimen due to the lack of proper education or poor patient conditions. Some reports demonstrated that up to one-third of the patients with bacterial pneumonia were unable to produce sputum [13,14].

Several criteria have been proposed to evaluate the quality of sputum samples. These criteria have different combinations and cutoffs for the minimum number of squamous epithelial cells (SEC) and/or polymorphonuclear leukocytes (PMN) per low-power field (LPF; 100× objective) [15-17], but none of these guidelines are considered superior. Currently, the modified Murray–Washington (MW) grouping system is primarily used to evaluate the quality of sputum in Korea [17]. This grouping system consists of six groups according to the numbers of SEC and PMN per LPF. There is a consensus that groups 1–3 are unacceptable, whereas groups 4 and 5 are acceptable. However, controversy persists regarding the acceptability of group 6, which shows less than 10 SEC and PMN each, per LPF. In the original MW grouping system, group 6 (<10 SEC) was categorized as acceptable [17]. Bartlett [16] also used SEC and PMN to score sputum quality. Although these grouping systems have been used for several decades, their clinical utility has not been well established. An in-depth analysis of culture results and clinical data is needed in relation to the classification of the sputum groups. Additionally, we found that some samples do not belong to groups 1–6, and no research has been undertaken, to date, for the interpretation of these unclassified groups. Concomitant blood culture is recommended to increase the chance of isolating causative CAP organisms in addition to sputum cultures [5,6]. However, some guidelines recommend only blood cultures instead of sputum cultures for the diagnosis of CAP [6].

We evaluated the clinical relevance of sputum cultures using the MW grouping system and examined the frequency of bacterial growth in each group. We also analyzed the results of requested concomitant blood cultures.

From December 2016 to February 2017, a total of 1,523 consecutive sputum specimens, requested for cultures and Gram stains, were included from Gyeongsang National University Hospital. Electronic medical records were reviewed to analyze the requested concomitant blood cultures, presence of pneumonia, prior antibiotic use before sputum culture, and antibiotic change after receiving the sputum culture results from the patients with positive cultures. The clinical diagnosis was based on clinical signs and symptoms of lower respiratory tract infections and the presence of a new infiltrate, on chest radiographs, that was at least segmental and not due to any preexisting conditions or other known causes.

This study was approved by the institutional review board of Gyeongsang National University Hospital (IRB approval no., GNUH 2019-10-027-002).

Gram stain smears were prepared from the most visually purulent portion of each sputum specimen. The sputum quality was assessed microscopically and each sputum sample was grouped, as outlined by the MW grouping system [17]. The most purulent portion of each specimen was inoculated onto blood, chocolate, and MacConkey’s agars. Then samples were streaked out by a medical technician using a standard 4-quadrant streaking method and incubated at 35°C with 5% CO2 for 48 hours. Agar plates were examined at 16–24 hours and 48 hours, and the predominant organisms were identified and quantified, by an experienced technician, according to the furthest quadrant with visible colonies. Respiratory potential pathogens included , , , , , ., , , , and Gram-negative bacilli [1,11]. Normal throat flora, such as αa- or γ-streptococcus, coagulase-negative staphylococcus, spp., spp., spp., were discarded. Blood cultures were performed using the BacT/Alert 3D system (bioMérieux, Marcy-l’Etoile, France) with FA plus (aerobic) and FN plus (anaerobic) bottles. An amount of 5–10 mL was inoculated into each bottle. Two sets were produced for each episode. Biochemical identification and antibiotic susceptibility tests were conducted using the Vitek-2 system (bioMérieux). To standardize reporting across each technician, uniform standard operating procedures, on-site training, and internal and external quality controls were established.

Frequencies are expressed as a percentage (%) of the categorical variables. We compared the results for bacterial growth and pneumonia between the groups using the chi-square test and Fisher’s exact test. All of the statistical analyses were performed using SAS ver. 9.4 (SAS Institute Inc., Cary, NC, USA). -values <0.05 were considered statistically significant. 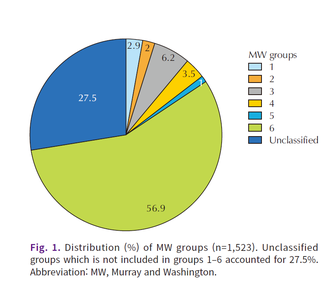 Figure 1. Distribution (%) of MW groups (n=1,523). Unclassified groups which is not included in groups 1–6 accounted for 27.5%. Abbreviation: MW, Murray and Washington.

Table 2 . Growth of respiratory potential pathogens and clinical diagnosis of pneumonia according to MW groups and the among unclassified groups using the MW grouping system. 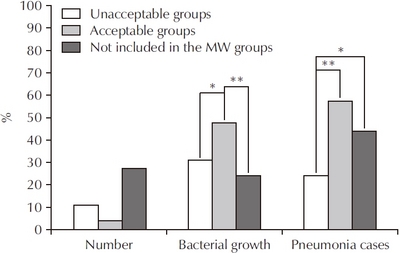 Figure 2. Comparison of bacterial growth rates and diagnosis of pneumonia among the unacceptable (groups 1–3), acceptable (groups 4–5), and not included in the MW groups. Abbreviation: MW, Murray and Washington. *<0.05, **<0.01.

Clinical decisions for antibiotic treatment of lower respiratory infections are aided by the results of Gram stains and sputum cultures [1,9,11]. However, sputum Gram stains are sometimes unreliable and ambiguous [8,18]. Therefore, the optimal collection of high-quality sputum specimens and the correct isolation and identification of colonies are important [8,10]. However, obtaining an acceptable specimen is sometimes difficult because of the possibility of contamination from normal oropharyngeal flora [7]. In addition, microbiological expertise is required for the appropriate selection of the colonies of potential respiratory pathogens. Sputum cultures are rather subjective and difficult to standardize technically [10,18]. The yield of sputum cultures was 22.6% in this study. Among these potential respiratory pathogens (N=344), 43.6% were associated with pneumonia. Therefore, overall 10% of the sputum specimens were related to the clinical diagnosis of pneumonia.

Expectorated sputum is the most common lower respiratory tract specimen collected by microbiology laboratories. Expectorated sputum is often difficult to obtain as many specimens are mixed with upper airway specimens. In our study, the unacceptable groups (1–3) accounted for 11.1%, whereas the acceptable groups (4–5) accounted for only 4.5%. In contrast, group 6 was predominant (56.9%), and a surprisingly large proportion (27.5%) did not belong to any of the groups in the current MW grouping system (Fig. 1).

In other studies, the percentage of acceptable quality specimen ranged from 40%–70%, as compared to 4.5% in our study. However, these studies differed from ours with respect to the subjects, who were patients with pneumonia [9,12], and the criteria for a good sample, which was “SEC <10/LPF” [19].

There are several limitations to this study. This is a retrospective study rather than a prospective study. The medical records were reviewed only for the patients showing positive results in their sputum cultures, and not for all the patients. There was no differentiation between CAP and HAP. Mortality, immunocompromised patients such as those suffering from neutropenia, prior other medical treatments, or clinical severity were not analyzed. One-quarter of the subjects received antibiotics before sputum collection, which might have affected the sputum culture results. Active antibiotic stewardship was not applied at our institute, thus lowering the change of antibiotics even after receiving the antibiotic susceptibility test results.

In conclusion, approximately 10% of the sputum cultures were related to the clinical diagnosis of pneumonia. The lower yield might have been due to the inappropriate requests for sputum cultures or prior antibiotic usage. One-quarter did not belong to the current MW groups. More than half of the sputum samples were in group 6 and showed the lowest positive rate. More large-scale studies will be needed on MW group 6. Improvement of sputum culture quality is required to enhance the diagnosis of pneumonia. The beneficial effects of additional blood cultures should be carefully reassessed and further studied, for the diagnosis of lower respiratory tract infections.