This is an Open Access article distributed under the terms of the Creative Commons Attribution Non-Commercial License (http://creativecommons.org/licenses/by-nc/3.0) which permits unrestricted non-commercial use, distribution, and reproduction in any medium, provided the original work is properly cited.

The accuracy-based lipid (ABL) proficiency testing (PT) program was started in 2016 by the Korean External Quality Assessment Service to minimize the matrix effect. We analyzed 3 years of the program. We made or purchased six kinds of commutable frozen sera based on the Clinical and Laboratory Standards Institute 37A guideline and distributed it in two rounds per year from 2016 to 2018. We obtained reference values for levels of total cholesterol (TC), high-density lipoprotein cholesterol (HDLC), low-density lipoprotein cholesterol (LDLC), total glycerides, and triglycerides in each fresh frozen pool at the reference-measurement laboratories. We evaluated the average percent bias of the participating laboratories based on the National Cholesterol Education Program (NCEP) bias limit. The number of participating laboratories evaluating TC, HDLC, LDLC, total glycerides, and triglycerides increased from 164 to 223, 163 to 223, 158 to 214, 98 to 139, and 61 to 82, respectively. The average percent bias of all participating laboratories for TC, HDLC, LDLC, total glycerides, and triglycerides was +0.14%, -0.54%, +2.9%, -1.08%, and -1.32%, respectively. The average percent bias exceeded the NCEP bias limit only once or twice for TC, HDLC, and total glycerides but frequently for LDLC (eight out of 18 pools). The manufacturer-specific bias estimation report seemed useful for traceability. Although the average percent bias of participating laboratories for TC, HDLC, LDLC, total glycerides, and triglycerides was mostly within the bias limit provided by NCEP, cases of bias limit exceeding the NCEP bias limit occurred occasionally, especially for LDLC during the 3 years of the ABL PT program in Korea, suggesting that ABL PT can be used to keep maintaining traceability.

Table 2 . Number of participating laboratories for accuracy-based lipids programs of the Korean Association of External Quality Assessment Service from 2016 to 2018. 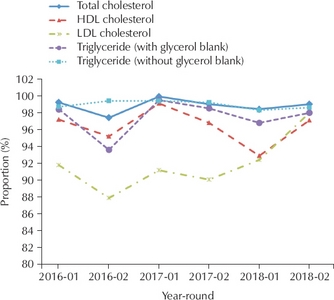 Change in the proportion of participating laboratories with an acceptable performance in each test in the accuracy-based lipids proficiency testing from 2016 to 2018 in the Korean External Quality Assurance Scheme. We excluded the CAL-17-03 pool among three pools of the 2017-01 round, as it may not be suitable for the evaluation of LDL cholesterol performance in the external quality assurance program. Ab-breviations: HDL, high-density lipoprotein; LDL, low-density lipoprotein.